The Living Goddess of Nepal : Kumari

In Nepal Kumari is given high respect and dignity especially during social and religious functions. There are several Kumaris including Kumaris in Kathmandu, Patan, Bhaktapur and Bungamati within the Kathmandu Valley. However, among all of them, the Kumari of Kathmandu housed in the Kumari Bihar situated at the vicinity of Hanuman Dhoka Palace at Basantapur is regarded as the most important one and is also known as the Royal Kumari. There are several verses in the Vedas which eloquently glorify the position of Kumaris and their role in various spheres of life. As a female deity, she possesses Shakti (Power). 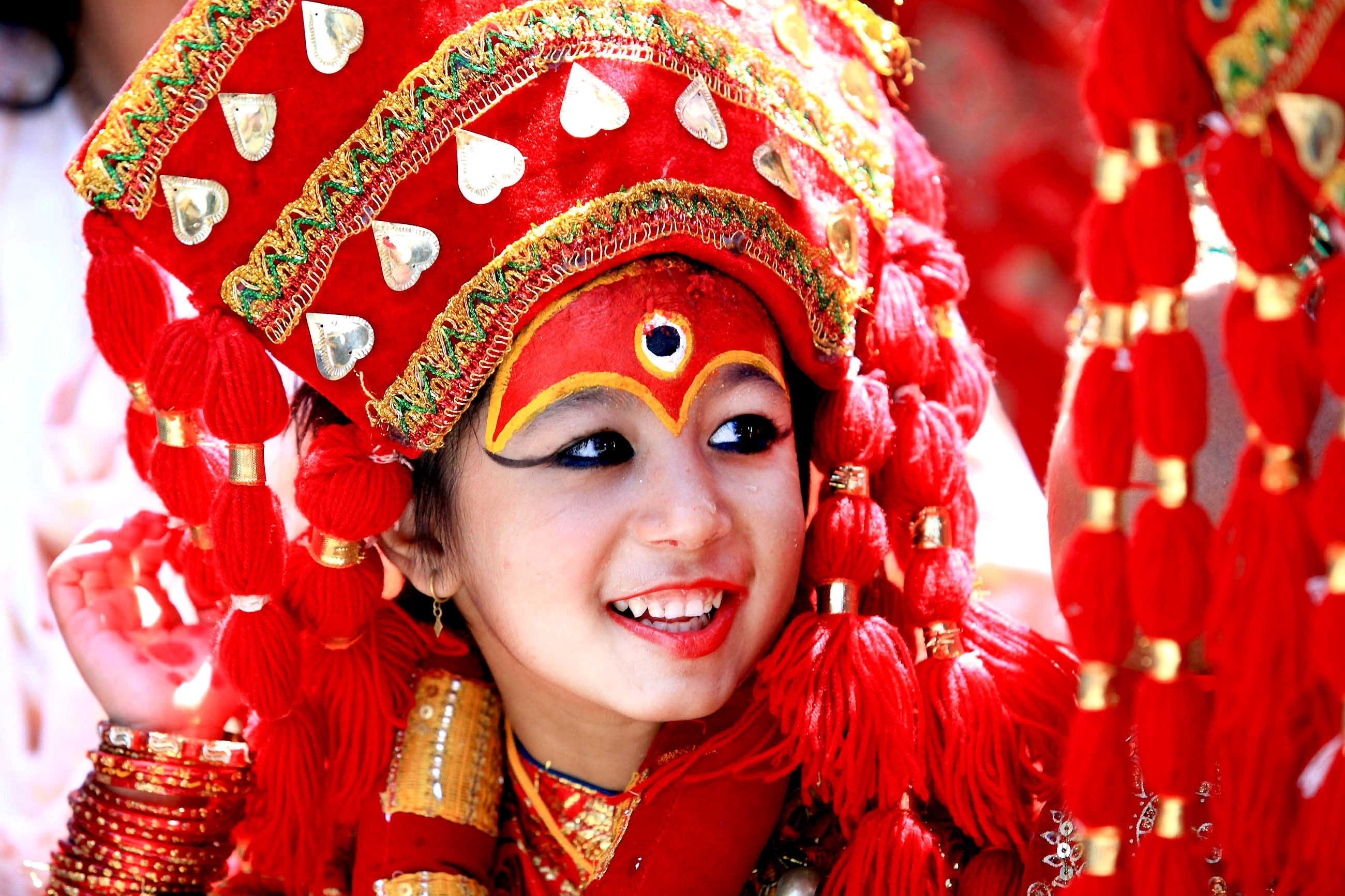 Both benevolent and fearful she is worshipped as Kali, Durga and Taleju, etc. However, Kumari as a female deity is worshipped as the living virgin goddess, the defender of the living beings. Why is a little girl from the Shakya family chosen as a living goddess? The whole concept of Kumari as a living goddess originated when Tantricism, was at its height in the Kathmandu Valley. The Bajracharya and Shakya clans played a crucial role and so the tradition of requiring the Kumari to come from the Shakya clan was established. 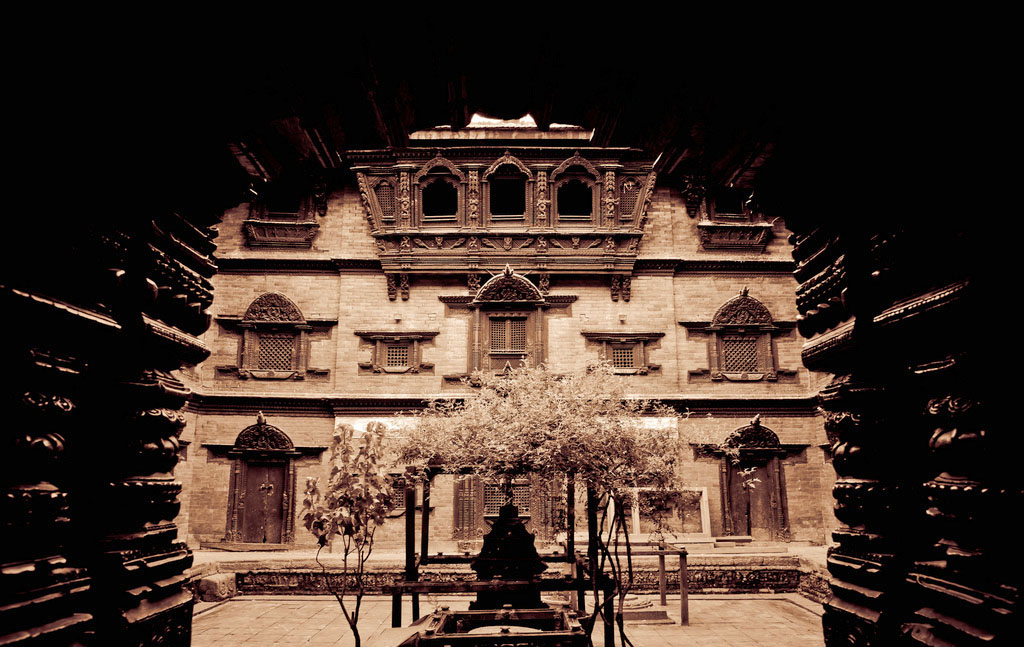 That night the king again saw Goddess Taleju in his dream. In his dream she strictly warned him that he shall no longer be blessed by her. His dynasty was going to end. The king would only be able to get darshan in the new form of pre-menstrual girl belonging to the Shakya caste in whom the goddess herself is said to dwell as goddess Kumari. Since then, the Kumari is worshipped as the living virgin goddess. The Kumari bahal was built in 1767 during the reign of King Jaya Prakash Malla. He also instituted the festival of drawing the chariot of Kumari, the living goddess followed by other two living gods- Ganesh and Bhairav. 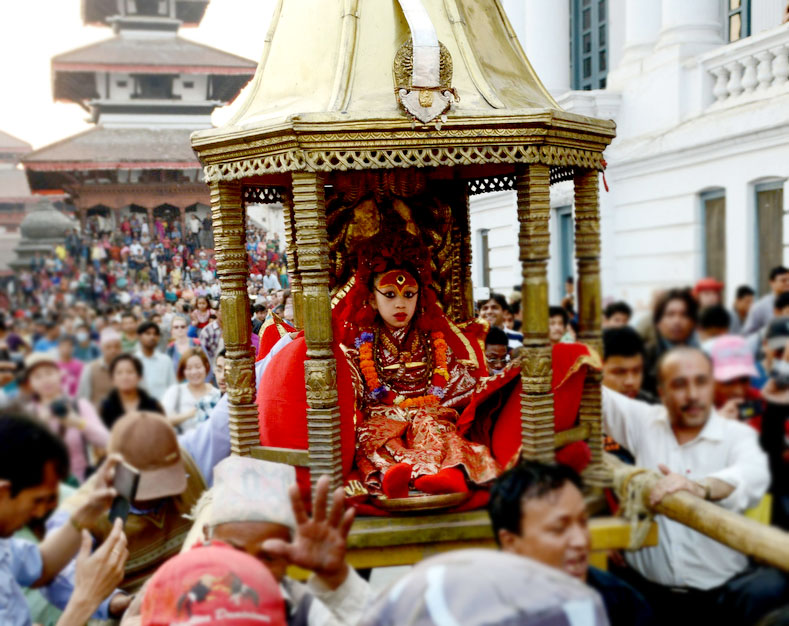 On 25th September 1768 AD Prithvi Narayan Shah, the king of Gorkha attacked Kathmandu when Indra Jatra (festival) was being observed in full swing. Jaya Prakash’s troops were all intoxicated in the chariot pulling festival. The Gorkha King easily captured Kathmandu and received blessings from the Kumari.

The Kumari is given high dignity and is regarded as a personification of the Goddess Taleju. She is considered as an incarnation of Durga, the symbol of power, the divine universal-mother goddess. The devotees consider looking at her as a mascot will bring them good luck.

The four or five year old little Shakya girl is chosen every ten years. The girl who is to be made Royal Kumari must possess several qualities. She must be free from any disfigurement. She must be a virgin with an unblemished body. She must have prominent black eyes or gorgeous expressive eyes, white teeth without any gaps. She must have a sonorous voice, long slender arms, delicate and soft hands and feet and straight hair curled towards the right side. Above all, she should possess 32 noble virtues. She must have a sense of courage and should not fear a masked man or an animal sacrifice. Her horoscope must match that of the king.

The selection of the Kumari ceremony which is usually held on the eighth day of Dashain festival is called Kal-ratri. During the day many buffaloes are sacrificed and bloody buffalo heads are placed in candlelight in the courtyard of the Taleju temple inside Hanuman Dhoka. At midnight the Kumari is taken out to walk clockwise around the grotesque heads. A dancer wearing a grostesque mask dances near her. If the child remains quite and fearless during this test she is recognized as a real Kumari.Then after, the secret tantric ritual is held to remove all her past memories from her body and purify her as a pure vessel for the Taleju goddess to enter. It takes a whole night and in the morning she walks across a white cloth in front of a huge crowd as the new Kumari.

After becoming Kumari, the child is taken into a house called Kumari Bahal in Basantapur. She has to live in isolation from her family and relatives in Kumari Bahal. She is always dressed in red and her forehead is painted in red. The third eye is put in her forehead. She sits on her throne with her attendants.

Non-Hindus are allowed to enter the courtyard but may not go up. She usually acknowledges greetings from her balcony windows. For all the sacrifice a girl child makes in order to become a Kumari, she gets very little in compensation. When she comes to the end of her career as the Kumari when she reaches puberty she has to walk out with virtually nothing. The month’s stipend she is paid is a mere pittance and not enough for anything. If the Kumari tradition is to vanish from our culture it will indeed be a great pity. Not only will our culture be so much the poorer but there will be less to show to the numerous foreign tourists who come to Nepal attracted by our rich cultural traditions. 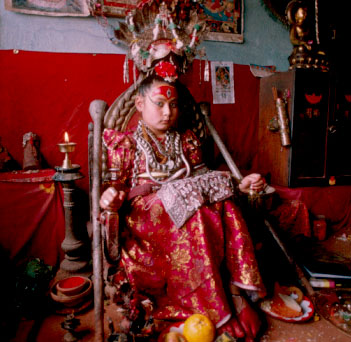 Nepal’s Living Goddess Kumari in her throne
Prev / Next